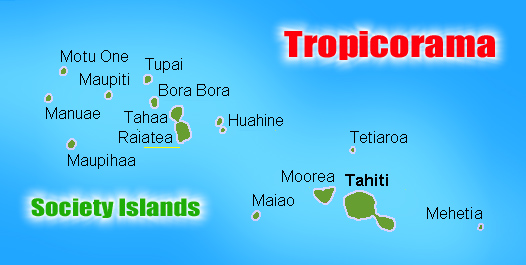 Ra’iātea is the second largest of the Society Islands, after Tahiti, in French Polynesia.

A traditional name for the island is Havai’i, homeland of the Māori people.

The Māori of Aotearoa regard this place as a sacred marae of their ancestors.

The main township on Ra’iātea is ‘Uturoa, the administrative centre for the Leeward Islands.

There are colleges for students from the regional islands of Bora Bora, Taha’a, Huahine and Maupiti.

The extinct Ulieta bird originated from this island, along with other unknown species, there is only one drawing of it, in the Natural History Museum London.

The islands of Ra’iātea and Taha’a are both enclosed by a single coral reef.

Ra’iātea is the largest and most populated of the Leeward Islands, with a land area of 167km2 and 12,000 inhabitants.

The first European to sight Ra’iātea was Pedro Fernandes de Queirós in 1606.

The Polynesian navigator Tupaia, who sailed with explorer James Cook, was born in Ra’iātea around 1725.

Ra’iātea has a small road that runs around the entire island.

There is less tourism compared to other islands in the archipelago. There are two marinas, a four-star hotel The Hawaiki Nui, and a port for cruise ships.

The economy is mainly agricultural with exports of vanilla, pineapple and coconut. Fa’aroa Valley cultivates vanilla, and pearl farming is an important industry, while the farming of cattle, sheep and pigs has decreased.


Explore Ra’iātea and the nearby islands with this map. Zoom in and toggle between map and satellite modes as needed.