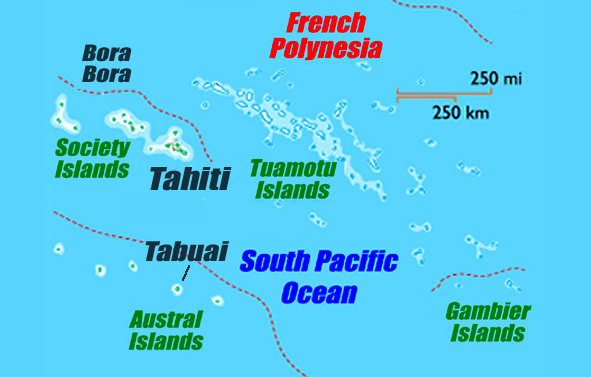 Tubuai is located south of Tahiti, offering a cooler climate for holidaymakers.

The Austral islands are a great art area in the South Pacific.

Tubuai has a population 2200 people.

The island is ringed by a lagoon and encircling barrier reef.

A break in the northern reef enables passage for ships.

The barrier reef creates a lagoon of 85sqkm, up to 5km wide.

Because it is shallow it is usually bright turquoise or jade in colour.

Tubuai has two volcanic domes, with Mt Taita’a being highest at 422m.

Seven islets (motus) are located on the reef that encircles the island.

Captain James Cook learned the island’s name when natives surrounded his ship in canoes in 1777.

The next Europeans to arrive were HMS Bounty mutineers, in 1789.

A conflict arose while the mutineers were still on the ship and islanders were killed in their canoes.

The climate of Tubuai is cooler than Tahiti, with temperatures averaging 20–25C. The lagoon waters typically reach 26C in summer but only drop a few degrees in winter.

The humidity is lower than Tahiti, which appeals to some prospective visitors.